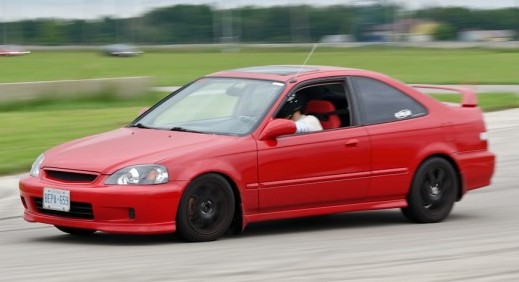 This year we are going to be competing again in the CSCS Time Attack series.  We really enjoyed it last year and we think with each season the organization is getting stronger and better organized.

Last year was our first season competing in Time Attack so we’re looking forward to coming back and at least having a clue as to what it’s all about.  Whether our car is ready that’s a completely different story …

For everyone who’s unfamiliar with Time Attack cars go out and have 3 laps to set their fastest times possible.  The cars are then ranked on their lap times and a winner is determined based on the fastest lap for your class and category.

This year we’re stepping into the Modified class from Street.  Last year was all about trying to the car out and seeing what worked and didn’t for us.  We spent the entire season on a very old set of BF Goodrich TA KD tires that have been on the car since 2003.  To be honest I was blown away by how good these tires still were but it was apparent that our tires and suspension were the thing holding us back the most.

Most of the time on track I was fighting a lot of under steer mostly coming from the added torque of the turbo.  Anytime you would start to apply the power in a tight corner the car would either spin the tires or push it’s way across the track.

The main difference between the Modified class is that you can run an R compound tire which is going to help improve our traction and and stability through all the corners, especially with the added power of our new motor.    Thanks to our Team Toyo sponsorship we’ll be running a set of 225/45/15 R888 which should really help improve our lap times 🙂

Unfortunately I don’t know if we’ll be running the Modified category for our first event as we’re waiting on our motor to be finished and our 15×8 949 Racing rims to come for our new R compound tires.  I guess we’ll see how all the timelines work out.  I’m crossing my fingers for the best.