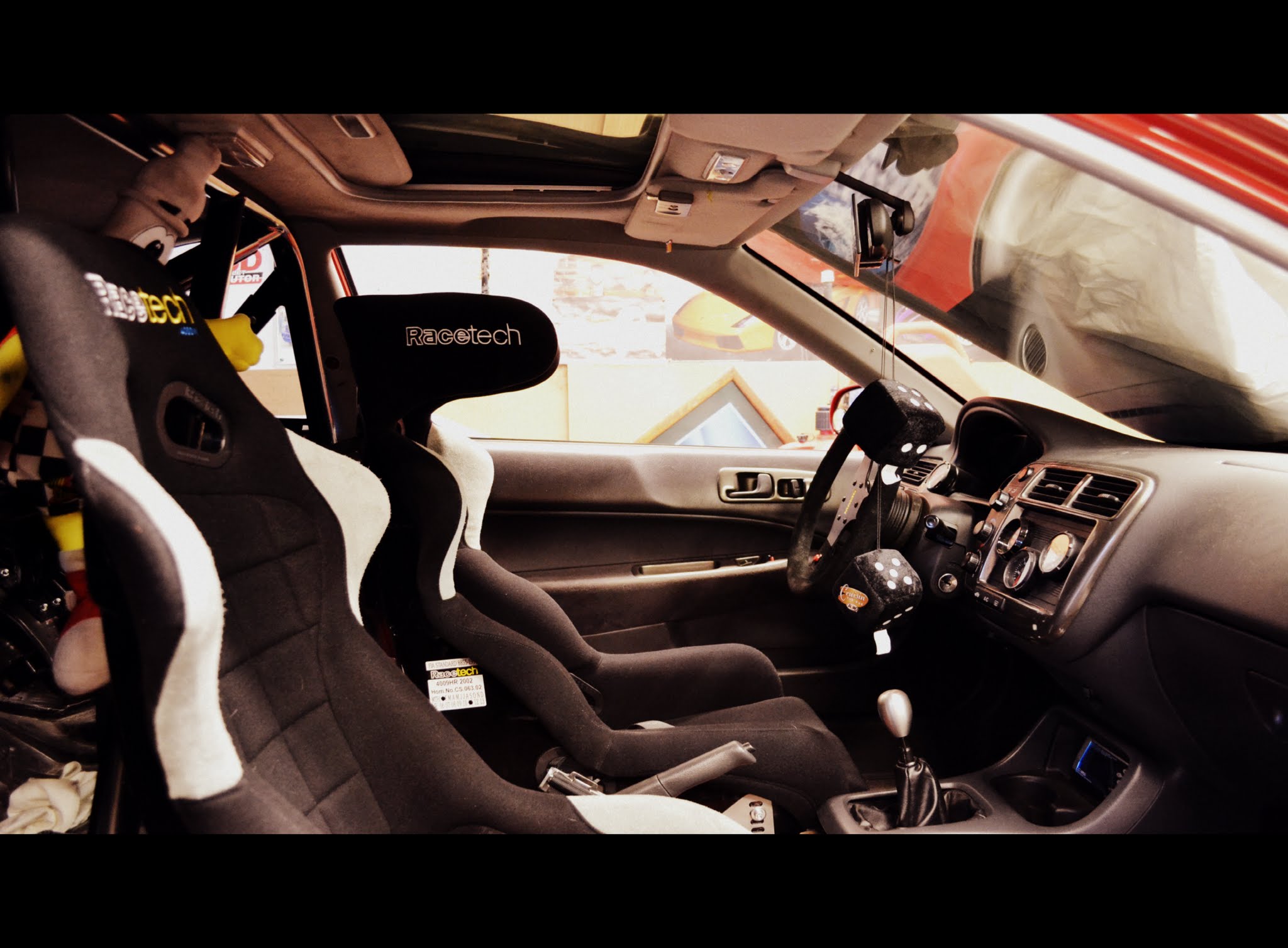 The clock is ticking and there isn’t much time left until the start of the 2012 season.  We’ve been hard at work preparing for the season, ensuring that we have everything wrapped as early as possible to get out to the track as early as we can.  Last year our first shake down run of the car was also our first event which wound up hurting us in our race for the championship.  Our goal for this season was to be better prepared and to make the right decisions to align ourselves for a successful season.

With that being said we’ve been working hard to get the rest of our changes finished.  Our main goal for this off season was safety, safety, safety.  Last year I found myself fighting to keep myself planted in the seat.  Not only was this tiring but it took away from my focus on the track.  Instead of being able to focus on my braking points and apexes I was constantly being distracted with having to push myself back into my seat thinking about how much my arms or legs hurt.  With our goal of getting the car safer and keeping me more comfortable we started researching which seats would work best for our setup.  Luckily one of our sponsors Paragon Competition carries some of the best seats around.  We took a trip down to their show room and I got a chance to sit on some different seats, ultimately deciding to go with a Racetech 4009HR.  I found the Racetech seats to be the most comfortable for my body type, and I loved how flexible they were.  All the foam is removable and customizable in order to make the seat fit you like a glove.  It took awhile for me to decide whether or not to get the Halo version of the seat or not, but ultimately after talking with the guys at Paragon and a few other racers I decided to go with the Halo for my protection and comfort.

With our driver seat picked I needed decide how to mount the seat.  After much research I decided on the PCI seat bracket.  This bracket is unbelievable, it’s a solid piece that’s CNC’d, the adjustability of the seat is un-paralleled.  The bracket is a fixed mount bracket, but still allows you to adjust where the seat is forwards and backwards as well as side to side.  This will allow us to adjust the seat as needed at the track but know that once we’re on the track we won’t experience any flex in the bracket itself.  The PCI seat bracket comes with CNC’d side mounts that can be offset forwards and backwards and allow you to mount the seat almost right to the floor.  I was really impressed with these brackets as most guys have to use the Racetech brackets as most other off the shelf brackets won’t work.  With the PCI’s they worked without any issues at all!  Here’s a picture of the final product:

For the passenger seat I wanted something light and easy for my passengers to get in and out of, so I decided on a Racetech 4000W it was the most comfortable and only tipped the scales at a paltry 13 pounds.  For the passenger seat we wanted to ensure we had some adjustability in the seat so we decided to modify our current super low slider to work with the side mounted Racetech seat.  Also after talking with the guys at Paragon they let us know that the odd shape of the Racetech 4000W would require us to use their special side mounts.  We purchased them and modified our sliders to accept the side mounts which was actually pretty straight forward.  We bolted everything together with some quality grade 8 fasteners and were good to go.  Here’s some pictures of the bracket:

The guys at Paragon also hooked us up with a nice set of TRS Pro Magnum 6 point belts to go with our new seats.  I was really impressed with how light these belts were and how comfortable they were.  We went with a pull up on the driver side and a pull down on the passenger side which seems to work out pretty well.

I have to say that after all the hard work I’m really happy with the setup that we have, we’re still tweaking a little bit here and there and we’ll still probably need to adjust the driver seat at bit more once we get the car on the track, but overall I’m very happy with the changes we’ve made and I’m confident that these changes are not only going to make us safer but faster as well.

This week we’re heading out to see Scott Murfin at Can-Alignment to get the car corner weighted and our alignment setup for the season.  Last year we were extremely impressed with what Scott did with the car and I’m looking forward to have him set everything up again this year.  Once that’s completed we basically have the car ready to go and hit the track, hopefully we’ll get out there this week or next for our first shakedown session.  I can’t wait!

One thought on “More preparation for 2012”