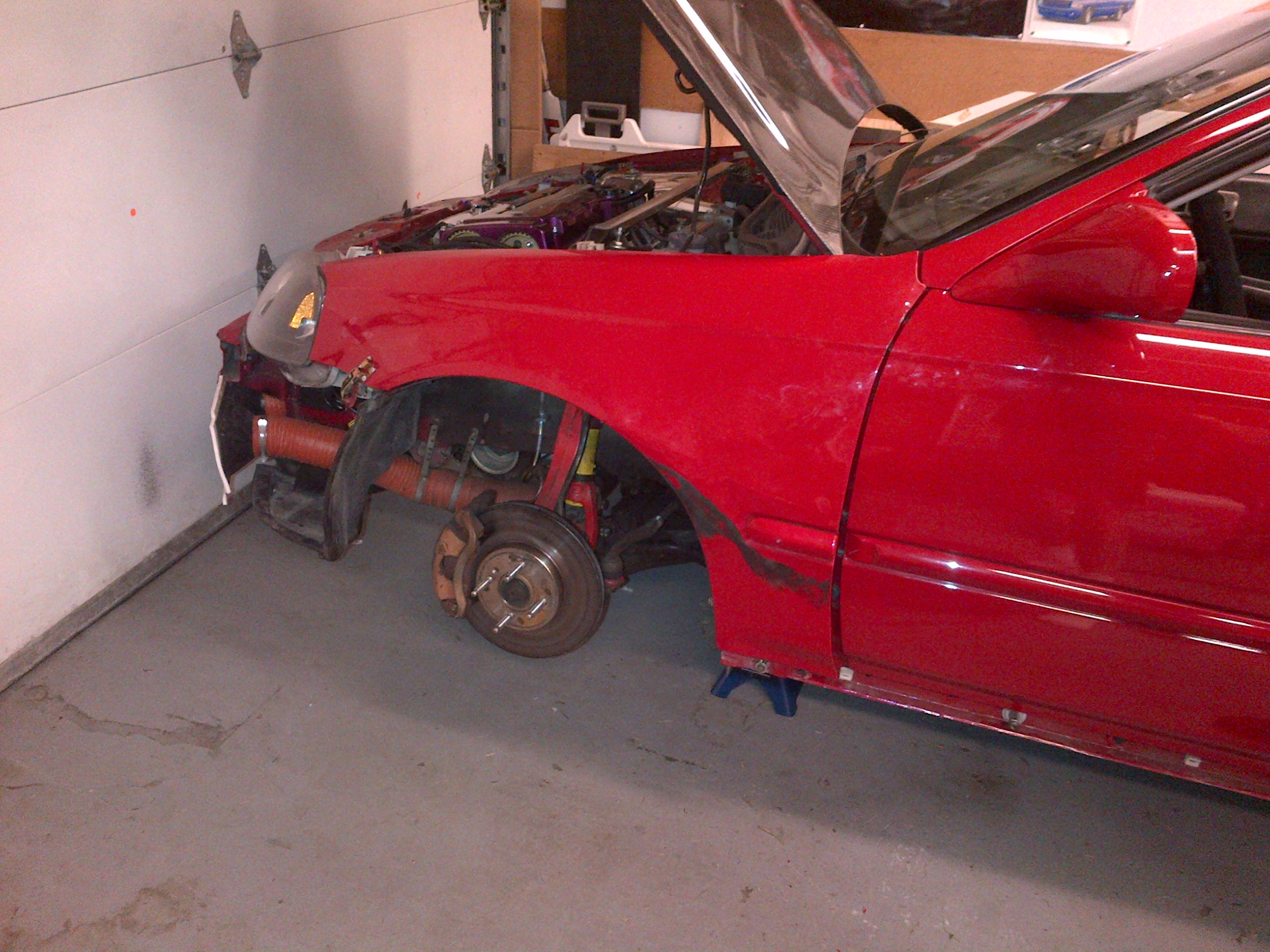 If you missed the first part of the story head over here to read about how our first Sigma event went and our catastrophic wheel failure.

With everything that took place at our first event, we had a ton of work on our plate to get ready for next event with CSCS.  After getting the car home and off the trailer we managed to asses the damage and really see what we were working with.  We knew from the event that the damage was mostly cosmetic, however we really needed to get everything taken apart so we could see what was broken and what needed replacing.  After getting our loaner wheel off, and inspecting everything on the driver side we found that the damage was minimal.  The only thing that was really damaged was the rotor which wasn’t even so bad, mostly just a little chewed up around the edges where it made contact with the road.  I think since I managed to get the car off into the grass as quickly as I did, I managed to minimize the amount of damage that was actually done to any of the suspension pieces.  The only other thing that needed replacing was the balljoint nut (even though the balljoint itself was still fine).

The other piece that needed to be replaced was the fender, which was very much junk or so I thought (see picture below).  My dad decided to play around and see if he could straighten the fender back out, from below you can see he actually did a fairly good job.  If we were still at the track, I wouldn’t feel bad about heading back out with a fender like that.

The next, most important piece, that needed to be replaced were our rims. The first thing I did when I got home from the event was contact 949 Racing and let them know what happened and I’m glad I did. Emilio from 949 Racing was amazing to work with and went above and beyond making sure we were taken care of. Unfortunately 949 didn’t have any stock on their 15×8 or 15×9 6UL rims, so we would have to wait until their next shipment in June. Emilio offered to send us his own wheels from his car to help us out, but even that wouldn’t have been in time for our next CSCS event. We needed wheels and we needed them fast. I decided to give JRP a phone call and see if they had a set of Enkei PF01s 15×8 rims in stock. Since it was JRP I was fairly confident that they would either have them in stock or could get them relatively quick. Luckily they did have them in stock and Steve from JRP really helped us out of a bind. We got our Nitto NT01 tires checked out and remounted on the new wheels all in a few hours, thanks again to JRP!

The final piece that I wanted to address before the CSCS event was our front calipers. We had installed our Integra Type R calipers almost 10 years ago, and they weren’t even new calipers when we installed. We noticed on our last pad change that there was some unusual pad wear and after inspecting the sliders decided it was time to replace/rebuild the calipers. Instead of rebuilding, I decided it would be best just to replace the calipers with a set of new OEM calipers from Honda. I’ve heard too many horror stories of guys having issues with rebuild brands from parts stores like Canadian Tire and Parts Source, I’d rather do something right the first time then having to do it twice. We took the car to CarWings Auto to get the calipers installed, fluid flushed with some new Motul RBF600 and get everything in the front of the car inspected.

Once the car was back from CarWings we had to address the alignment on the car. Knowing that we took such a hard hit, I decided it was best to get the car re-aligned for the next event.  The only person that I’ll let touch the alignment on our car is Scott from Can-Alignments.  We’ve been going to Scott now for a few years and I have to say there’s no one better then him for getting your car aligned for racing.  Scott knows how to set a car up properly for each driver.  After our first time seeing him, we picked up almost a second on the track at our next event, changing nothing but the alignment. Make sure you check out Can-Alignments and if you haven’t already taken the time to get your car properly aligned, make sure you take your car to Scott!

Now that the car was properly aligned we were ready for our last shakedown event before CSCS the first Ontario Time Attack event of the season at Mosport DDT.  Stay tuned for part three of the series to find out how things went!