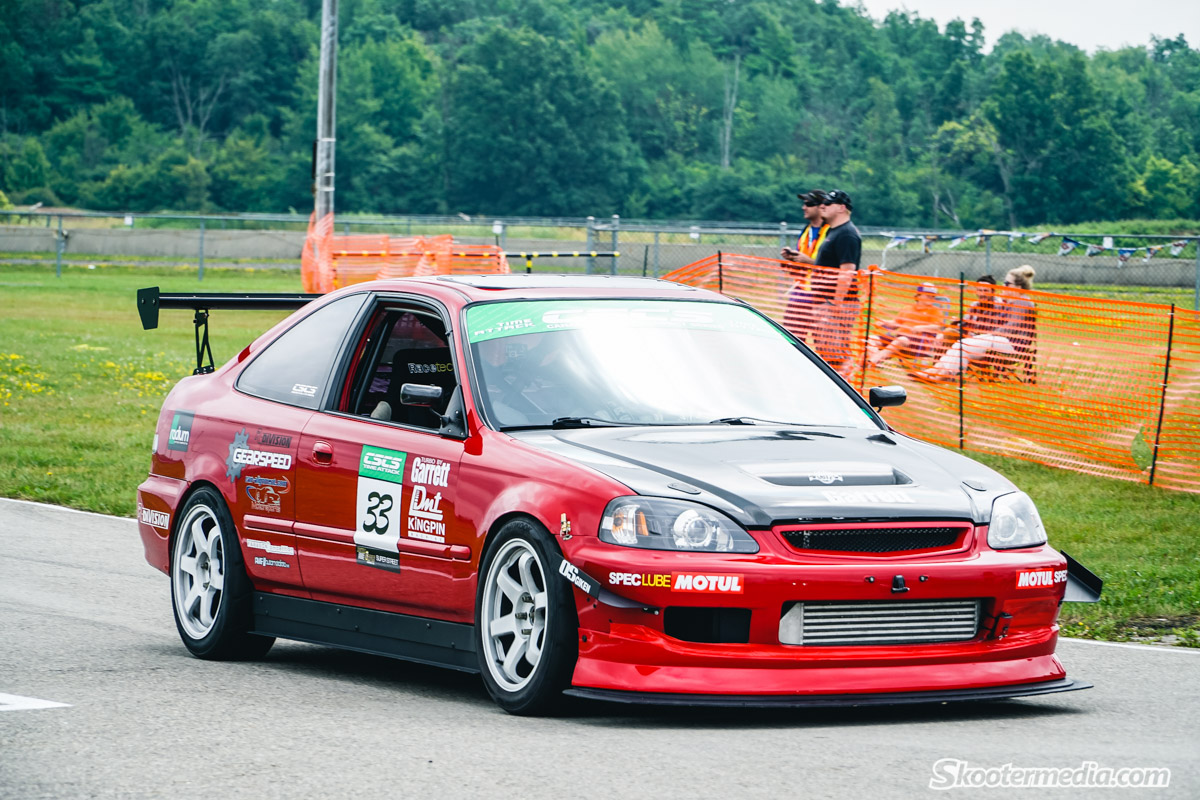 One of the greatest problems facing most Time Attack vehicles is heat. Our cars our built to do compete for 5 laps at a time no where near the number of laps that most road racing cars are built to handle. Throw in the fact that most Time Attack vehicles are pushing tremendous amounts of horsepower and you begin to understand why heat is our number one enemy. For us, we’ve been fighting the battle against coolant and oil temperatures since day one. Every season we’ve made incremental improvements to our cooling system in order to combat this issue. Each of these incremental improvements has given us some reprieve from overheating, however as the car has changed so to have its cooling requirements.
In the past after 5-6 laps our car’s coolant temperatures would start to exceed 200°F, this mean having to bring the car in in order to let it cool off. We would also sometimes have to sit out sessions, in order to ensure that the car did not overheat. There’s nothing harder as a driver then trying to learn new tracks 5 laps at a time. It’s incredibly difficult to get into any sort of a rhythm with such a short amount of time.
This is why we started to look for changes we could make in order to improve our car’s cooling capacity. This is where CSF Radiator came in and offered for us to test out one of their full sized DC2 radiators. There was only one problem, how to fit a full sized radiator in our car. Having a turbocharger in an EK civic, means not having a lot of room for anything else, including a full sized radiator. Most drag and street driven cars just opt for a half sized radiator and that serves their purpose without any issues. Unfortunately Time Attack is a very different beast. The cars are not on track for as long as a normal road race, however they are still out there long enough that half sized radiator has to work very hard to keep everything cool. Throw in the fact that our car is pushing over 400whp and it only compounds the problem.
With all the information together we started the long and arduous process of installing the full sized radiator into the car along with the help from the guys at Dynamotorsports Tuning. Right from the beginning we were all very impressed by the build quality of the CSF Radiator. The attention to detail even in the packaging of the product was better then anything we had seen before.
We started by removing the old 1/2 sized radiator, along with our Setrab oil cooler (which we would re-use later), all our ducting, lines and everything else we had installed to help keep the car cool.

We then began to make space for the new full sized radiator. We decided that we would tuck the radiator up under neath the radiator support, and tilt the radiator forward. This would serve two purposes. First it would give us the clearance we needed between the turbo and the radiator and it would help line the radiator up with our hood mounted duct to help improve the overall efficiency of the radiator.

Placing the radiator in this position required a lot of effort. The guys at Dynamotorsports Tuning really did an excellent job of making all this work. The finished product made it look as though the radiator was meant to come this way from the factory.
After installing the radiator we began the arduous process of re-installing everything else including our Turbo By Garrett intercooler and Setrab Oil Cooler. Dynamotorsports fabricated some new mounts for both, and we decided to move the oil cooler from the front of the car to passenger side behind the front fog light. Since we had opted for such a large oil cooler it was a bit of trick to get everything to fit properly.
We also had to figure out a new way to mount our intercooler, since we had to remove our front crash bar to make everything fit.  We wound up fabricating a new mounting solution that allowed us to cut down on the length of our charge piping, which should help with turbo spool.
After getting everything installed, we took the car to one of the hottest events of the season. Round 2 of the CSCS Time Attack championship at Grand Bend Motorplex. I don’t know why but this event usually sees 35°C+ degree weather. Sure enough this year we were dealing with 40°C+ degrees of heat with the humidity so it was the perfect test for our new cooling system.
Once we had the car out on track we noticed an immediate improvement in our coolant temperatures. Before we would be lucky to be able to do 5 hard laps before the coolant temperatures were over 200°F. Now with our CSF Radiator we spent upwards of 20 minutes on track with coolant temperatures never exceeding 190°F. All this on one of the hottest days we’ve ever experienced on track. We were blown away by the improvements. We could now keep the car on track for longer then we had ever before, allowing us to dial in our setup and giving me a chance to get comfortable with the car and tracks.
We are more then happy with the end results. We expected some improvements, but not the kind that we saw right out of the box. We’ve yet to add any proper ducting which should help improve the efficiency even more. Definitely if you are in the market for a new radiator make sure to checkout what CSF Radiator has available for your setup. They offer a wide selection of radiators for different vehicles and manufacturers, so head on over to the CSF Radiator website today.
We also would like to thank Dynamotorsports for all the amazing fab work and help in making this setup work. As you can see, there was a lot of work in order to squeeze this full-sized radiator into our engine bay and we definitely couldn’t have made it happen without their help. If you are in the market for any fabrication, or tuning make sure you give them a call.
Finally we’d like to thank Giancarlo from Automotofoto.net for all his help and support and putting us in touch with the fine folks at CSF Racing, without his tireless work we wouldn’t have gotten the opportunity put in-front of us.
Thanks again to everyone, and see you all at the track!
Links:
CSF Radiators
Dynamotorsports
Setrab Oil Coolers
Turbo By Garrett
Automotofoto.net