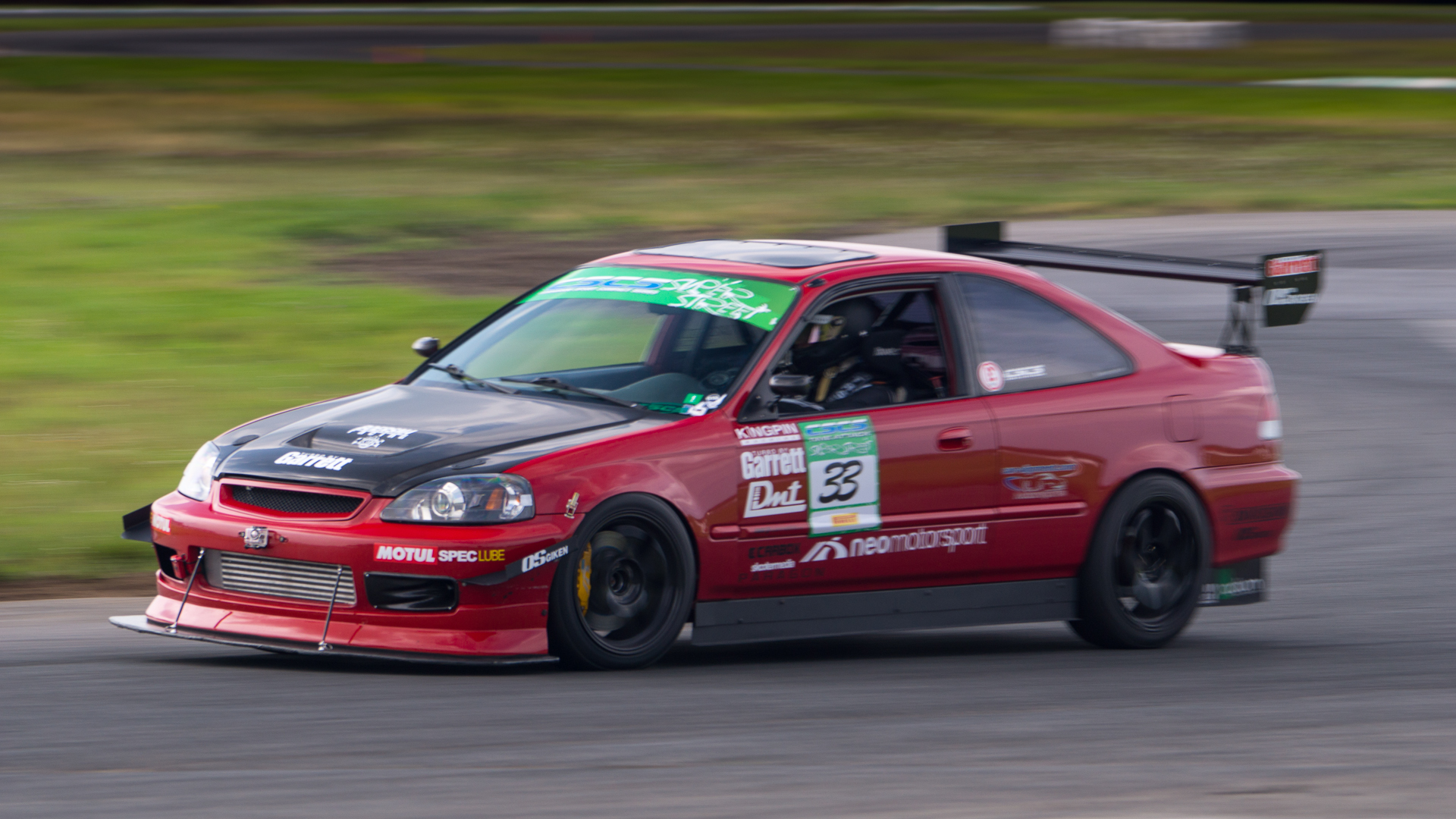 Braking is one of the most important aspects of racing. A good braking system gives you the confidence as a driver to push that extra 10%, to go that little bit further into the braking zone and to hopefully turn faster lap times. In recent years we’ve been running an 11.75″ Wilwood brake kit on the front of our car. This kit was bought when we still ran our 15″ wheel setup and it was the largest setup we could squeeze under a tiny 15″ wheel. Overall I was really happy with the way this kit performed, the Wilwood setup always gave us consistent braking and overall I was pretty happy with everything.

This year however, with more power we started to hit the limits of our brake setup. We started getting back to the point where we were cracking rotors fairly regularly and I started to notice that I could get into situations where the brakes weren’t slowing the car enough, causing me to lose confidence in my braking points. This got us started looking for a new brake setup to run on the car and talking with a few different manufacturers.

We had heard some great things about Neo Motorsport from a few of our competitors and got the chance to meet with them at our first CSCS race this year at DDT. We decided to meet with them after our event to go over our braking needs and take a look at what would work best given our needs and performance. Neo Motorsport has been working closely with racers for the past few years, using what they learn from racing to evolve their big brake kits.

After meeting with the team at Neo Motorsport, we decided that their Motorsport inspired F401 4 Piston Caliper would be best for our setup. You can see a sample of what the caliper looks like below.

With this caliper we would be able to run their newly designed 13″ rotor which utilizes a slotted hook design. The benefit of this design vs a drilled rotor is the the increased durability and longevity. For years cross-drilled rotors have been recognized as the best rotor to provide excellent initial bite and additional grip on the pad. As the brake pad grabs the rotor the leading edges of the slotted hook, they create additional bite on the pad face and provide the driver with a much more positive feedback in braking performance.

The slotted hook design retains all of the benefits of a traditional slotted rotor in that it cleans the pad surface and allows the pad to outgas through the recessed channels. Outgassing is when the temperature built up during the friction process cooks the gases out of the brake pad that could create a buffer between the pad and rotor which would be trapped in between the rotor and pad. By slotting the rotor face you are allowing the pad to releases these gases. The Neo Motorsport Big-Brake kit also utilizes a 2 piece rotor design which offers even more advantages vs a one piece design. Two piece rotors allow the iron brake discs to grow when heated.  As it is heated, a disc expands radially, increasing in diameter and circumference.  One-piece disc designs run into problems when this occurs.

Two-piece discs on the other hand, compensate for the expansion of the disc as it heats.  Also the two piece rotor is significantly lighter then the same sized one piece design as the center section of the rotor is replaced with and Aluminum hat. This helps reduce un-sprung rotational mass which is always a good thing.

The next step of process was to test fit everything to ensure that everything would fit the way we wanted. The guys at Neo Motorsport brought us a test kit to test and we got to work fitting everything on the car. Here’s a picture of the caliper and rotors installed on the car, everything bolted up as expected without any issues which is a testament to Neo Motorsport engineering and product development

Once we finished bolting everything up we test fit out wheels over the brakes to make sure everything cleared. With the design of the Neo Motorsport caliper being optimized for wheel clearance we didn’t have any issues squeezing our 17×9″ Volk TE-37SLs over top of these massive brakes.

We decided to stick to a familiar brake pad compound with our new brake setup. Another great feature of the Neo Motorsport brakes are their brake pad choices. They’ve used a caliper design that leverages a common pad shape. What this translates into is a plethora of brake pad choices available to you. Hawk, Carbotech, Cobalt Friction, Performance Friction, Pagid, you name it they have a pad that’s available for the Neo Motorsport caliper. We opted to stick with Hawk Performance DTC-70s, which is a brake pad that we’ve run for years and are very familiar with. This pad offers very high initial torque and bite and offers very good modulation having used this compound for years I can definitely say it’s not for everyone, but it seems to match my driving style perfectly.

We headed out to Toronto Motorsport Park, one of our favourite local tracks to test out the new brakes. We have tons of data at this track as well as tons of laps, so it made perfect sense to use this track for our testing. It would be easy to benchmark the performance of our new Neo Motorsport brake kit vs our old Wilwood kit. Being on a familiar track would also allow me to familiarize myself with the new brakes while being comfortable on track.

The first thing I noticed right away was the a huge improvement in pedal feel compared to our previous Wilwood setup. The Neo Motorsport brakes were designed to be incredibly rigid and strong and I could feel that immediately through the pedal. It’s funny as this generally doesn’t effect performance in anyway, but it inspires confidence in the brakes and I’ve always been a fan of a good “hard pedal”.

After going through the proper bedding procedure for our new pads and rotors, it was time to start our testing. Immediately I could feel how much better the brakes were. I was stopping 50-100 feet short for all of the corners and I had to start moving all my braking points further and further down track. This was most evident heading into the heaviest braking zone on the track turn 1, where you brake from 200+ km/h down to roughly 100km/h. You can see from the shot below that you’re starring at a giant berm as you barrel down to your braking point. Having completely confidence in your braking system is incredibly important for this corner as there’s tons of time to be found here.

After turning some laps I headed into the pits to look at the data. Once I fired up the laptop, it confirmed what I was feeling on track. I was seeing the added braking force in our data and this was being translated into higher speeds in our data coupled with shorter braking distances everywhere on track. You can see in the screenshot below where we have plotted speed over distance that for each corner on track I’m braking later and coming to the same minimum speed in a much shorter distance.

I was very impressed with the results of our testing and the data that we captured. With each session on track, I managed to improve on my previous best lap time and you could see looking at the data that one of the major contributing factors was the reduced braking distances. I can also say that the confidence the brakes were giving me was helping me push harder then I had ever pushed before.

Making the switch to the Neo Motorsport brakes was definitely one of the contributing factors in how well the car performed in the later half of the season. Our first event out after switching we finished 2nd and at the CSCS season finale at Toronto Motorsport Park we crushed the previous lap record taking home 1st place.

Neo Motorsport has done a fantastic job building an incredible braking system, make sure you check them out for all your braking needs. You definitely can’t go wrong!